We are fighting for families — in the Courtroom!

The Remembrance Project filed Amicus Briefs in two (2) very important cases involving the integrity of our laws.  Our Briefs focus on halting actions that would undermine public safety and the Rule of Law that places your families in danger.

City of El Cenizo, et al vs. State of Texas

Read About this Case

Brief Amicus Curiae of the Immigration Reform Law Institute, The Remembrance Project, National Sheriff’s Association, et al.
Filed May 11, 2015 with the U.S. Court of Appeals for the Fifth Circuit

Press Release. The Remembrance Project files Amicus Brief in lawsuit to save lives.

Read About this Case 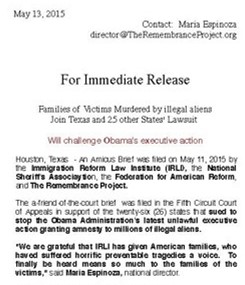 With your help, we are making a difference!

City of El Cenizo, et al vs. State of Texas

Background.  In May 2017, the Texas Legislature enacted Senate Bill 4 to prohibit sanctuary city policies. The law imposes duties on certain state officials and provides civil and criminal liability for violations of those duties. Three parts of the law are critical to this case: (A) the immigration-enforcement provisions, (B) the ICE-detainer mandate, and (C) the penalty provisions.

Background.  On November 20, 2014, the Obama Administration / Executive Branch announced (via a November 20, 2014 memorandum) he would unilaterally suspend immigration and deem four (4) million illegal aliens to be “lawfully present” and eligible for a host of benefits, including work authorization.  This program, called DAPA (Deferred Action for Parents of Americans), goes far beyond forbearing from removal or enforcement discretion. That memorandum also expanded DACA (Deferred Action for Childhood Arrivals), which was initiated in 2012 by a policy memorandum sent from former DHS Secretary Janet Napolitano.

Texas and 25 States file lawsuit.
On February 16, 2015, U.S. District Judge Andrew S. Hanen of the U.S. District Court for the Southern District of Texas in Brownsville ruled on the states’ lawsuit, issuing an order of temporary injunction blocking the federal government from implementing the Obama administration’s use of executive actions to grant relief from deportation, legal status, and permission to apply for work permits to illegal aliens who are the parents of a U.S. citizen or a lawful permanent resident.

U.S. Supreme Court results: 4-4 decision.  Lower-court ruling remains intact.  On June 23, 2016, the Supreme Court’s 4-4 vote lets the original decision issued by Judge Andrew Hanen and upheld by the Fifth Circuit Court to stand. The court did not issue an opinion but stated simply: “The judgment is affirmed by an equally divided Court.”

While this is a victory for the states that brought the lawsuit against the federal government, it could be a temporary victory.  Read chronology of proceedings in the New American here.